Coming up we have a workshop on making modular discord bots in python, a talk on 3D printing prosthetics, and a talk on the Computerphile YouTube channel.

Our events run at 7pm and run on our Discord or via Zoom. For events running on Zoom you can join with the button below. 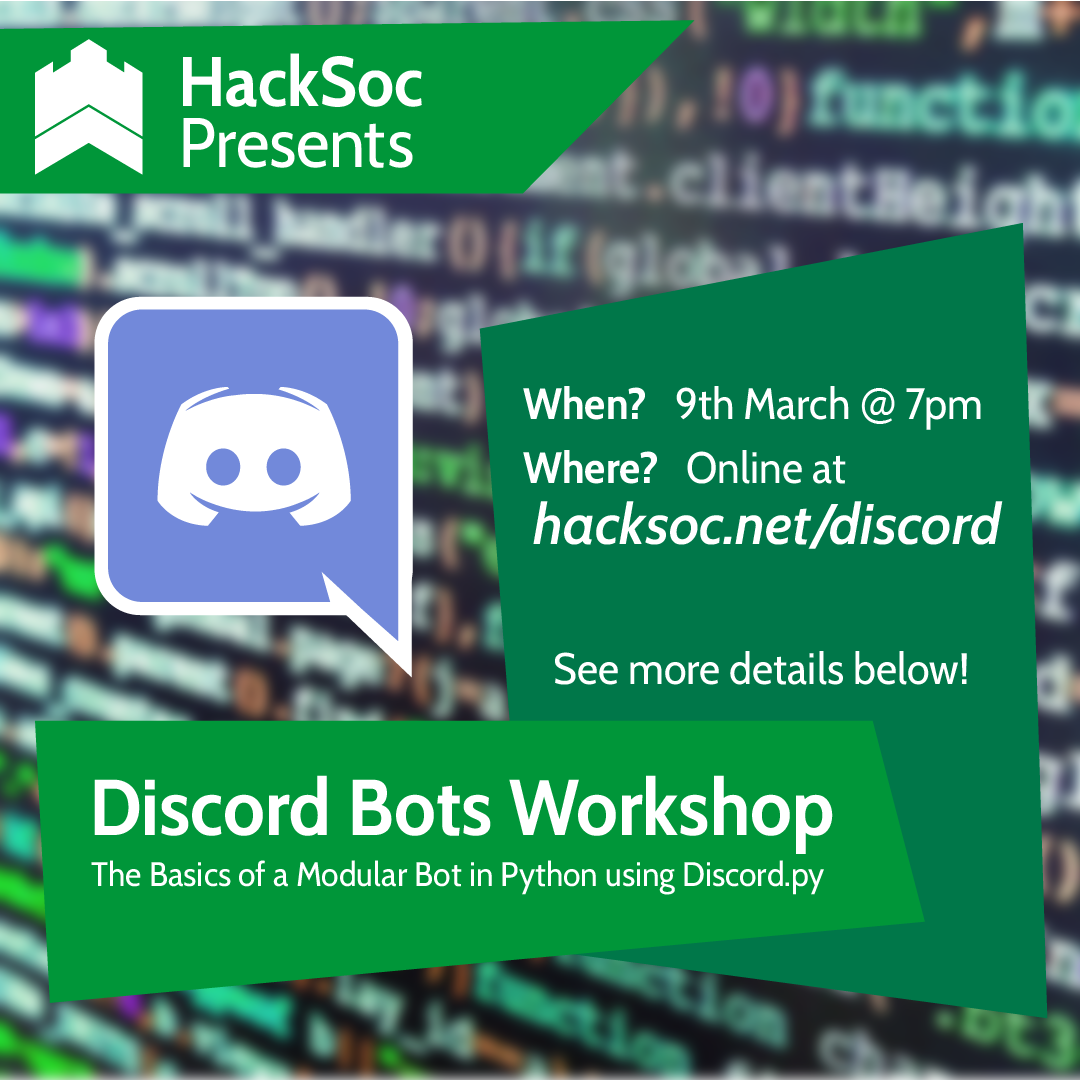 The Basics of a Modular Bot in Python using Discord.py

On the 3rd of March at 7pm on Discord we have a workshop on making modular python discord bots run by our Vice President, Alexi.

A great chance to dip your feet into Discord bot building with one of the most powerful frameworks out there. Come and put your python skills to work, or dive in the deep end if you've not programmed in python before. We'll be looking the basics of a text based bot with a whistle stop tour around the basics of the API. If you want to prep for this, make sure you have an up to date python 3 interpreter installed, a editor for coding and for bonus points go and set up a application/bot as a discord developer. 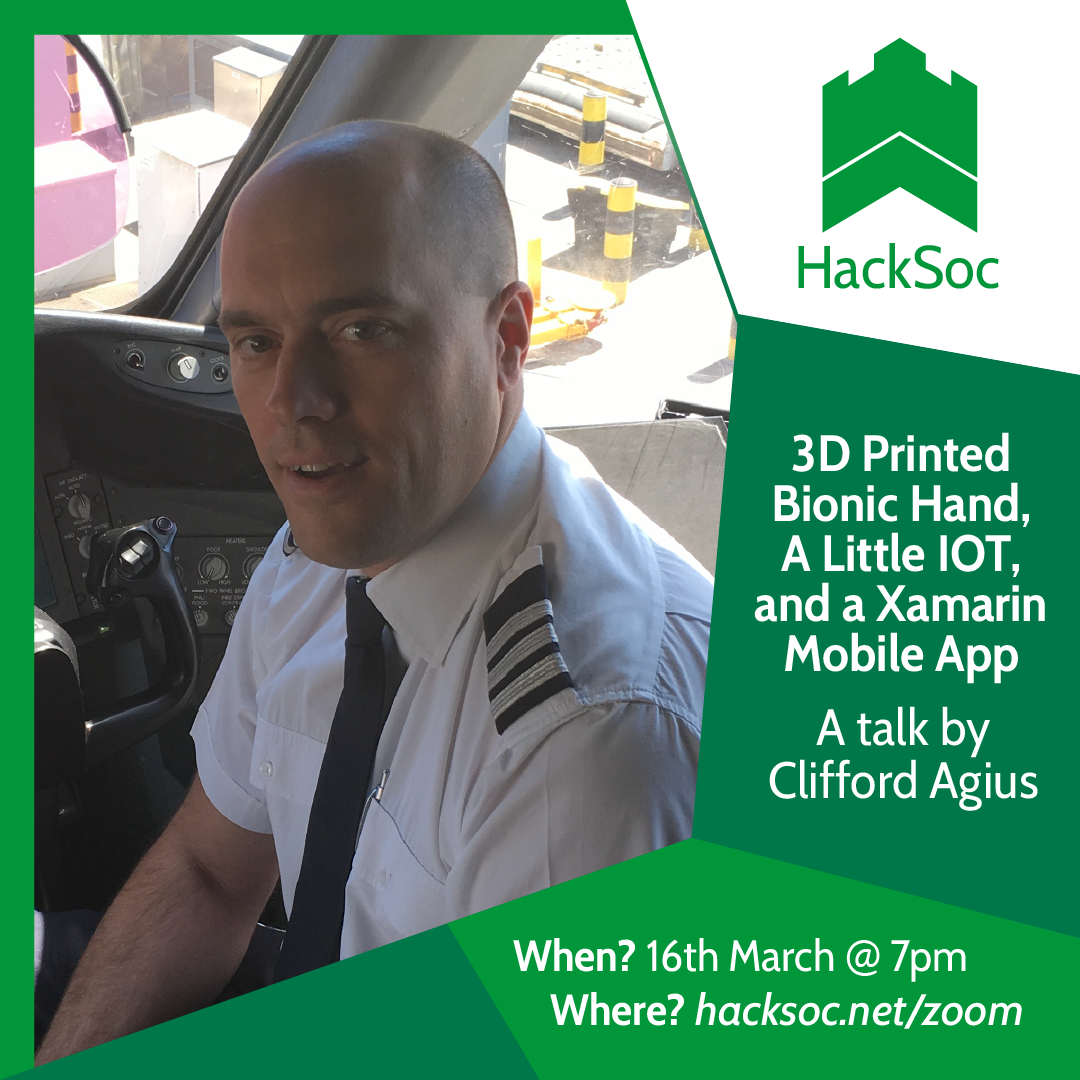 On Tuesday the 16th of March at 7pm on Zoom we have a talk from Clifford Agius on how technology can be used to make prosthetics both far better and far cheaper.

Meet Kayden, a local 15yr old young man and close family friend, who was born with no left forearm and hand. The National Health Service (NHS) is an amazing service in the UK, however their prosthetic provision is both basic and expensive (to the NHS). Surely with modern technology we can not only improve the lives of young people like Kayden but also demonstrate how we can do it more cost effectively than current options. This talk details how I set about building on the wonderful work of the OpenBionics team to provide Kayden with an alternative to the NHS prosthesis. We'll discuss:

Clifford Agius is a freelance developer that just so happens to fly a Boeing 787 around the world. 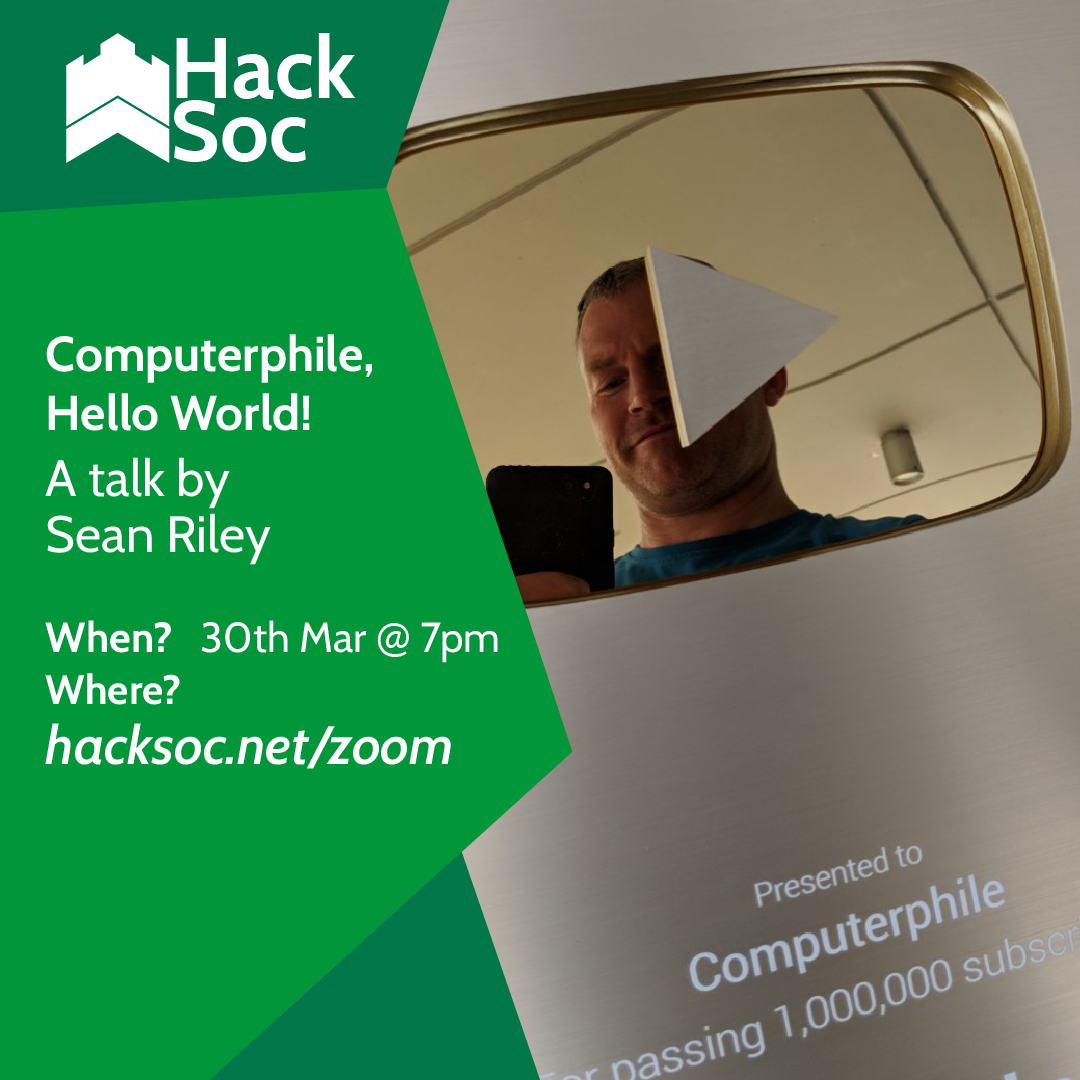 Coming up on the 30th of March at 7pm on Zoom we have a talk from Sean Riley, the person behind the famous Computerphile YouTube channel on how the channel came to be.

With nearly 2 million subscribers, the Computerphile YouTube channel has a special connection to University of Nottingham’s Computer Science. Where did Computerphile come from? Why Nottingham? How do the videos get made? Sean Riley who films, edits and runs the channel gives us the Computerphile Origin Story from a remote secret bunker (aka his office)

After completing A-Levels in Maths, Physics and Art in the dim and distant past, Sean decided that Maths and Physics seemed too much like hard work and embarked on a media career. First he ran around Soho with video tapes. Next, he managed to snag a job flying around the world installing and training people how to use broadcast (TV) software systems, it seems that maths and physics hadn’t escaped entirely! After a side-shuffle into operating those software systems, he settled in the East Midlands, working at BBC Nottingham as a TV News director and all-round dogs-body. Here he met journalist Brady Haran, of Numberphile and Periodic Table of Videos fame. As BBC budgets were squeezed, all BBC Staff were taught to self-shoot, and use both cameras and editing software. Sean now had the tools to annoy thousands of people on YouTube with shaky camera work and home-made animations.

Every Friday at 7pm we have our Cyber Security Workshops over on Zoom.

During this week's workshop you will have another opportunity to practice going through the process of gaining full control over a vulnerable server hosted on the tryhackme platform. Come along to learn some new valuable skills whilst also gaining an insight into how you can make your own projects more secure. No previous experience of programming or cyber security is required. It would be helpful however if you could install Kali Linux on a virtual machine before the workshop, if you have any problems doing this you could drop a message in the cyber security channel on the HackSoc discord or I can try and help during the workshop. A good tutorial for installing the virtual machine is here.

So whether you are a seasoned hacker, or just interested, be sure to come along.

Give a Lighting Talk

Got a topic you know a bit about and want to share? This term we will be running some lightning talks, either in a lighting talk night or as a extra thing during our other events. A lighting talk is a short (three to five minute) talk giving a quick dive into a specific topic.

If you want to give a talk open a ticket on the discord server, or drop us an email to [email protected]

The HackSoc Discord is the place to be this year. It is where you can chat about tech, or anything else, as well as where you can find out the latest information about our upcoming events.